Piezo foils are especially suitable for recording and analyzing vibrations in a wide variety of applications. The foils are available in many different thicknesses and can be used for large-area integrating measurements as well as for applications with high spatial resolution. For example, complex multi-sensor arrays can be used to analyze structural vibrations for their theoretically expected behavior.

Advantages of piezo film as a transducer:

Due to the low sensor mass and the simple application by gluing, piezo film offers good prerequisites for vibration analysis on fast rotating machine parts. As active sensor elements, they offer an elegant and inexpensive alternative to other transducers in many areas.

The figure shows an application example from the field of dynamic rail load analysis, where the film sensors with charge amplifiers are glued to the side of a rail. The output signal when a train passes behaves linearly to the strain due to the rail bending for frequencies above approx. 0.1 Hz, whereby the passing of the individual axles is reproduced very clearly. Also recognizable is the very long-wave bending of the rail due to the total train weight. 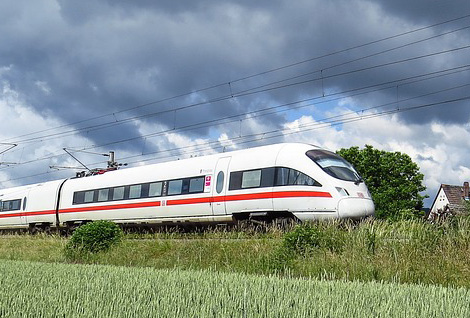